What if someone told you that approximately every 20 minutes in the United States a baby is stillborn.

Heartbreaking, isn’t it….but what if?

What if you knew a simple, no-cost technique that could save some of those lives?

Wouldn’t you want to tell everyone you knew?

Over the years we have been there for each other: sharing the unfathomable first days and weeks after saying goodbye to our daughters, surviving their birthdays without them, enduring successful and unsuccessful subsequent pregnancies, celebrating the births and birthdays of our other children, and reaching out to families who have recently lost a baby to stillbirth and infant death.

We are five Iowa moms who met in 2003 after each lost a daughter to stillbirth or infant death. When we met, we had no idea that our baby girls – Emma, Grace Biondi, Jayden, Grace Elizabeth and Madeline – had given us a powerful gift – the gift of friendship.

We founded Healthy Birth DayTM dedicated to preventing stillbirths and infant deaths through education, advocacy and parent support and launched the Count the KicksTM program in 2009.

Count the KicksTM is dedicated to educating expectant parents about the importance of tracking their baby’s movements daily during the third trimester of pregnancy. The goal of Count the KicksTM is to improve the chances of delivering a healthy baby and prevent unexpected birth complications and even late-term stillbirth.

As a parent, it’s reassuring to Count the KicksTM to make sure your baby is active and healthy, and counting kicks may reduce the stillbirth rate.

Scientific studies1 indicate kick counting, a daily record of a baby’s movements (kicks, rolls, punches, jabs) during the third trimester, is a safe and simple way to monitor a baby’s well-being in addition to regular prenatal visits.

COUNTING KICKS IS WHAT MOMS SHOULD DO. IT’S IMPORTANT AND EASY TOO!

By keeping track of each time your baby kicks, rolls or pokes, you can monitor your baby’s health and begin to create a bond with him or her. Starting at the 3rd trimester, begin counting.  Here’s how:

When we started Count the KicksTMwe had a dream that if we could save just one baby our efforts would be worth it.  We are proud to say that since the launch of Count the KicksTM, Iowa’s stillbirth rate has decreased by 26%!  We are committed to achieving the same results across the country. 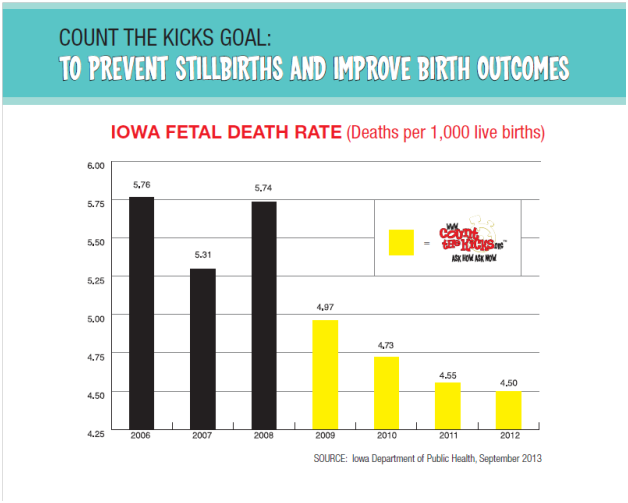 More importantly, behind each number is a story – a name.  Allow us to introduce you to some of them.

“I just wanted to write and say how deeply thankful I am for this initiative! I now have a 3 month old little guy home in my arms that wouldn’t have been here without Count the Kicks….I was told that our little Cooper would not have made it through the day had I not been counting kicks and paying attention to his movement. I praise God every day for this initiative and being in tune with my baby before even meeting him.”   – Cooper’s mom

“…the doctor said her blood levels were so low she wouldn’t have made it if we’d waited another 10 minutes to deliver her. So because of your campaign I was more aware of her movement and able to bring attention to a problem, and because of that problem saved her life!”   – Erika, new mom to Chesney

“This was my third otherwise healthy pregnancy and I felt like somewhat of an expert, not needing to read up on what I should expect while expecting. 🙂 The only new information I received from my doctor was your “Count the Kicks” brochure…I am so grateful to you and your campaign for bringing awareness to this important issue. I am so glad we received your brochure, because of which we took the time each night to get to know our unborn baby and his kicks. It TRULY helped to save our Ryan’s life.”  –  Ryan came into the world in January 2013, and had a true knot in the umbilical cord.

Lastly allow us to introduce Alexandra (Alex) who ICEA member, Tamela Hatcher, helped save by sharing Count the KicksTM in her childbirth education program.

As told by Alex’s mother,

“ The best laid plans….As first time parents, we had our birth plan all laid out.  We wanted the golden hour, delayed cord clamping, natural birth, straight to the breast.  A c-section was my biggest fear.  Then Thursday Oct. 3rd came, and everything changed.  I had been busy at work trying to get everything transitioned in anticipation of my due date, almost 3 weeks away.  When I was finally able to sit down at my desk, my reminder to count kicks was blinking at me.  I suddenly realized that my little acrobat hadn’t moved all day.  I immediately knew something was wrong and the only question was whether I went to my doctor’s office directly across the street or straight to the hospital.  I called the doctor’s office and headed over.

The first sigh of relief was when I got hooked up for the non-stress test, and they found a heartbeat.  As I was being monitored, there was no change in the heartbeat, which indicated no movement.  I was sent to Mercy’s maternity triage department for more extensive monitoring.  Further observation and an ultrasound showed no movement, despite all the poking and prodding to get her to move.  The baby needed out sooner rather than later.  My husband and I agreed there was no need to try and induce, we just needed her out and safe, so an emergency c-section was the new birth plan.

At 7:06pm, Alexandra was born with a heartbeat and an APGAR of 1.  She was gray, not breathing, and she certainly wasn’t moving.  All I knew from my vantage point on the operating table was that she was born and the room full of people was dead silent.  I anticipated going into it that they would have to work on her a bit, but the silence continued far longer than I would have thought.  I finally asked my husband if she was breathing, and he shook his head no.  One of the nurses went to the hallway and said “You guys need to get in here” and a bunch of people came rushing into the room to work on our daughter.   Finally my husband perked up, turned to me and told me she was breathing and had pinked up.  I have never known such relief in my life.

Alexandra required a stay in NICU for a week, and we couldn’t have been in better hands.  There was some type of infection that caused her to get so ill, and I still have to stop and catch my breath when I think about what could have been if we hadn’t been aware of the importance of counting your baby’s movements.  Up until that point, it had been smooth sailing with no issues in the pregnancy, and we had just had an ultrasound on Tuesday to check her size, and everything was fine then.

Thanks to counting kicks, we have our beautiful daughter.   – Sarah B.